All the talks listed below will be via Zoom meetings. About two weeks before each talk all members will receive an emailed invite from our Meetings Co-ordinator, asking if they wish to attend the talk. There is a limited of 95 attendees, and these will be allocated to the first 95 responses to that email. A few days before the actual date of the talk, a link to join the meeting will be emailed to those confirmed acceptances. On the day of the talk, all attendees will be automatically ‘muted’ to avoid any interruptions from background noises.  Though the talks start at 11am, you can sign in to Zoom from 10:30am.

Step Back in Time 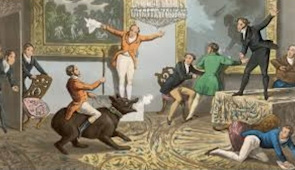 Paul gives a hilarious account of Great British Eccentrics, taking you on a light-hearted journey that looks at some of the great characters from our past. Like the Lord who spent many hours floating in a large indoor glass water tank writing rude letters to the Prime Minister. Listeners hear from a unique singer, a comically UFO obsessed peer, and then to more recent times some of the great eccentrics of the last 30 years including some world famous characters who you will recognise immediately as well as wonderfully ordinary eccentric people. Promises to be very comical.

The History of the BBC

In 2022 the BBC celebrates its Centenary the intervening 100 years has produced remarkable changes.  The talk explores the BBCs history and development and it covers audio recording and broadcasting even before the BBC was formed.

History of the Carry On films

Steve has many talks he presents, but the one that is very popular is his the History of the Carry On films. About how they were made, promises to be be very funny and interesting.

From script to stage: putting on a play in the age of Shakespeare

How did acting companies go about staging drama in Shakespeare’s London? This talk tracks the journey of plays from the page to the playhouse. It includes a guide to bad behaviour in the theatre, stories of how actors and authors got in (and out) of trouble, and an exploration of how Plymouth was portrayed on the Renaissance stage.

The Plymouth u3a Newsletter for April 2021 is now available.
As newsletters are for Plymouth u3a Members only, a password is required for access. This is the same as for Member Area pages.

If you have forgotten the password,
please use the Contact Form
to message the Membership Secretary and request the password. You must quote your Plymouth u3a membership number.

Group Leaders considering resuming meetings should undertake risk assessment which takes into account the latest government guidance on Covid-19.  The following Risk Assessment Templates, provided by the U3A, will help with this. Use the Risk Assessment(s) appropriate to your interest group activity.

U3A – Venue Day of Use Checklist

(They are all Word .docx files)

If all goes well, the government says that there is the potential for us all to meet up together in July.

As some of you know, I have been asking people for their ideas for new group subjects as we come out of lockdown, renew our friendships and groups start to meet up again.

Why not add to your social activities by joining or starting a new group – enlarging your circle of friends, enjoying each other’s company and perhaps learning something new too. After all, that is what the u3a is all about.

Lots of you have already replied and I have quite a list for you to peruse, choose and maybe add to.
So, in order of popularity:

National u3a are rehearsal for another virtual choir entitled After the Storm.

Calling all artists and photographers. The u3a virtual choir is back, this time performing a song entitled ‘After the Storm’, composed by Richard Keoghoe of Plymouth u3a. It is a song to inspire hope for the future as we come through the pandemic and enter a calmer, sunnier time.

Richard and the choir need artistic representations of the theme, which will be used to create the visuals for the YouTube clip and will showcase the song. If you can paint, draw and capture images on camera to represent the theme, please upload your contribution to:

Member Link is a new initiative set up by the National Office of u3a to support u3as and their members to keep talking and learning together.

Member link collates in one place all the advice, tips and resources to help us stay connected.

Mayflower 400 is a video put together by the Script to Screen Group.

The video is basically in magazine format, with several short pieces on different themes. It starts with a tour round Plymouth using the App that was released last year, pointing out the various places that relate to the Mayflower. Then there’s a skit about the “Mayflower Steps” and a couple of pieces about the ship’s biscuits and other food on the journey. Next, we have a historian talking about the behaviour of the Pilgrim Fathers once they reached America and finally there’s a speech from a member of the Wampanoag tribe that was planned for the 350th anniversary, but was dropped.

Each section is broken up by images from last year’s Illuminate. The video is fully subtitled and lasts around 25 minutes. There is also a document detailing the making of the video.

A password is required to view the video and read the document. This is the same as for the Members Area.

Recently, I thought it a novel idea to run a short workshop spread over three weeks and hosted on Zoom. In the beginning of the New Year, a new lockdown was threatening to keep us at home for the winter. I had three applicants, Norma, Norman and Cheryl. We set about dreaming up a lyric in the first week. I had no idea whether the workshop would be successful or, indeed, if we could actually write a song between us. There was only one rule and that the song was written by consensus.

By week two, we had the bare bones of a song lyrics. Collectively, the group decided the rhythm and they were able to create a melody on a piece of Open Source music software called Musescore 3. To this melody, we decided on the basic chord structure. Together, we wrote a song called The Puzzle of Love.

At the end of the session, I worked on the music to tidy it up. I received two e-mails, one from Norman, who had set another verse to the music using his MuseScore. The other was from Norma, who sent me some more words. They completed the last four bars of the chorus I had been struggling with.

Our third and final week, we decided on how to arrange the verses into choral parts. Oh yes, full SATB! The song quickly grew into something very big and dramatic. What if it could be sung by a full Soprano, Alto, Tenor and Bass choir? The workshop surpassed my expectations. I was delighted with the result and it seemed Norman, Norma and Cheryl were as well.

I fully support the idea of workshops in U3A. They are short and punchy. But the great thing about workshops are that there is a product at the end of the experience. No doubt, you’ll want to hear the end result. You can view our efforts on this link: https://youtu.be/iHotlQncG7A. 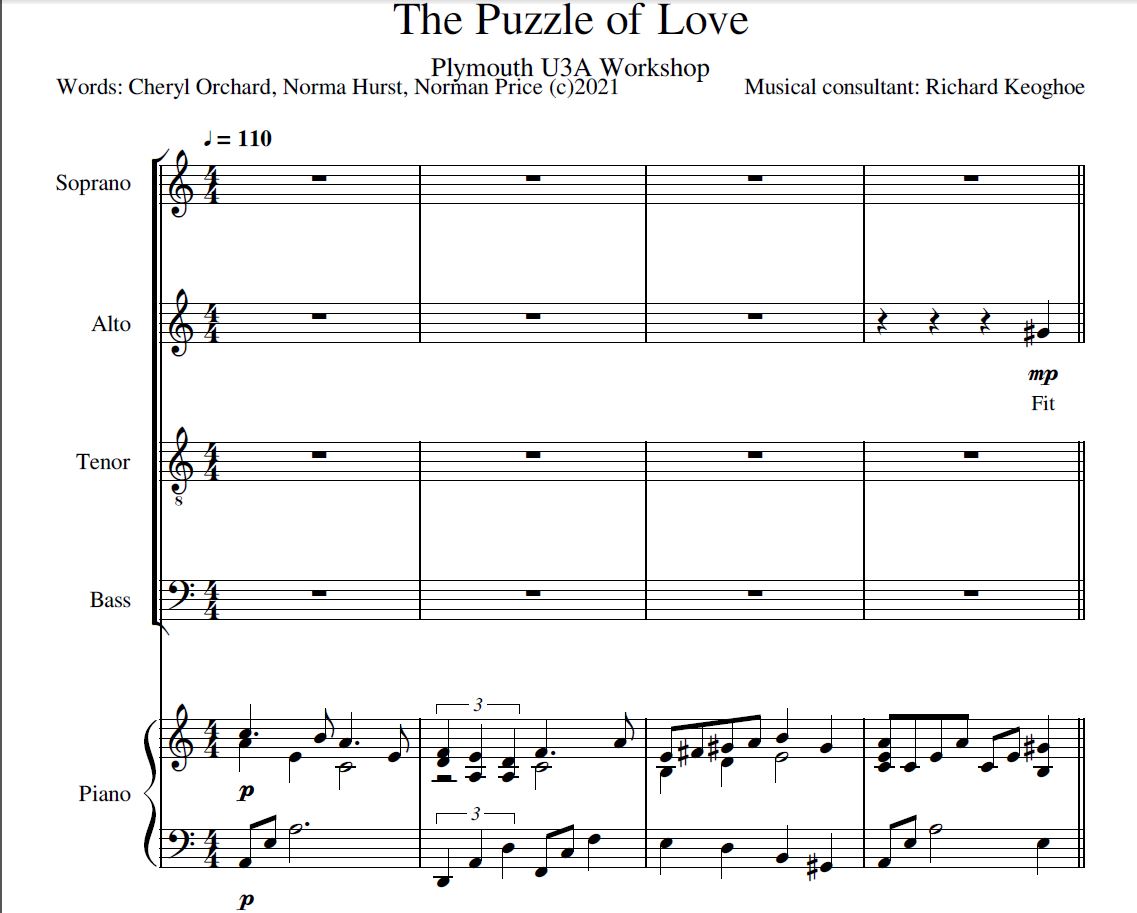 Our next virtual Talk Meeting will be on Zoom, on Monday 12th April, starting at 11:00am. Sign in from 10:30am. See Online Talks post for more details.

We use cookies on our website to give you the best experience by remembering your preferences and repeat visits. By clicking “Accept”, you consent to the use of ALL the cookies.
Cookie settingsACCEPT
Manage consent

This website uses cookies to improve your experience while you navigate through the website. Out of these, the cookies that are categorized as necessary are stored on your browser as they are essential for the working of basic functionalities of the website. We also use third-party cookies that help us analyze and understand how you use this website. These cookies will be stored in your browser only with your consent. You also have the option to opt-out of these cookies. But opting out of some of these cookies may affect your browsing experience.
Necessary Always Enabled