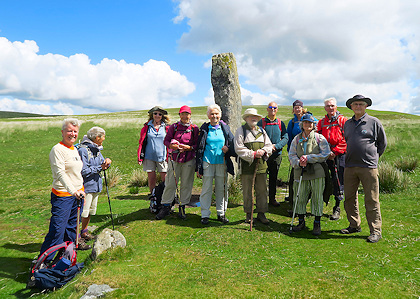 A walk group takes a break on Dartmoor

The Plymouth u3a* began in 1998 and our numbers fluctuate between 750 and 900 members. We are essentially a social organisation with over 70 different interest groups that offer every opportunity to Learn, Laugh, Live. This is the essence of the u3a ethos and our wide range of group subjects such as Walking, Languages, History, Literature, Photography, Crafts, Card and Board Games, Wine Tasting and Art (to name but a few) supports this. No qualifications are sought or offered and learning for enjoyment whilst interacting and enjoying the company of others is our prime motive.

* University of the Third Age

During the periods of lockdown and covid-19 restrictions a majority of our groups were able to continue by meeting and staying in touch via on-line activity. 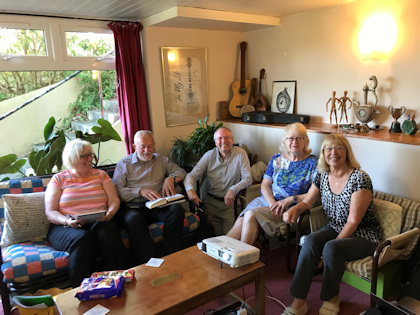 Now that all legal restrictions have been lifted we will resume our monthly general meetings. These meeting sessions include talks from practised speakers following the general meeting, which allows members to kept up to date with current u3a information. We hold our monthly Members General Meeting on the 2nd Monday morning in every month (10:00 to 12:00). (See the Monthly Meetings page for more details.)

Potential Members can be sure of a warm welcome and can use the event as an opportunity to meet people and make new friends, find out more information on our groups, as well as being able to join our membership in person if they so choose. There is always a monthly speaker to be enjoyed at these events and coffee and teas are available.

Membership to the u3a is open to anyone who is no longer in full time employment and our main source of members are those who, due to a change in their personal circumstances, suddenly find themselves with more time on their hands such as retirement/semi-retirement or other changes in their life. (Please see below for members reasons for joining). Queries about Membership can be directed to our .

History of the u3a Nationwide 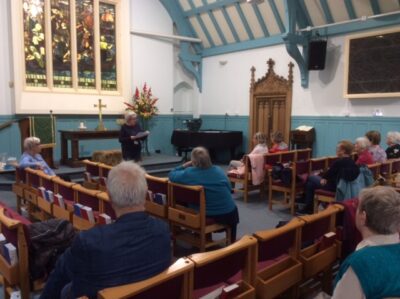 The u3a movement is a non-religious and non-political organisation and is also a registered charity. Introduced to Great Britain in 1981, it can now be found in over 1,000 towns and cities in the UK, boasting over a quarter of a million members nationwide. Each branch of the u3a is self-funding and is independently run by the members for the members and so membership subscriptions and costs are kept as low as possible. Every u3a is a mutual aid organisation that is operationally independent but remains a member of the Third Age Trust, which requires adherence to the guiding principles of the u3a movement. The organisation is not defined by age or past experience, but instead by the experiences still to be explored for pleasure.

It is the members who form groups of interest on subjects that provide the opportunity for other members to share their common interests. There is no distinction between learning and imparting knowledge and everyone within the organisation, including the Group Leaders and Committee Members who run each u3a, do so purely on a voluntary basis.

Note: No payments are made to members for services rendered in any u3a movement and outside financial assistance should only be sought if it does not imperil the integrity of the u3a movement.

When members were asked the reason that they joined the u3a, here are some examples that were offered: 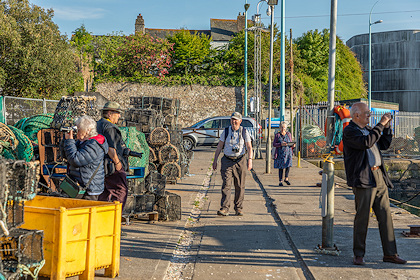 Members of the Photography Group in action (2019)

“I was a fulltime carer for my husband over several years and I later realised that this resulted in my losing touch with any social life that I used to enjoy. When I became a widow, I felt no confidence to suddenly engage with any activity outside my home. Having taken the plunge and became a member of the u3a, I joined a group where I was made to feel very welcome and gradually began to interact with others, which helped my self-esteem and gave my confidence a big boost. Joining the u3a was the best thing I could have done.”

“I live alone and have no family. The u3a provides me with so many interests resulting from the groups that I belong to and it is lovely to have events in my diary each month that I know I will meet people with the same interests.”

“Having taken retirement, I decided to join the u3a because I missed the daily social interaction. I am pleased to say that now my life is just as full, and I often wonder how I ever had time to go to out to work!”.

“Once we had both retired, we both found that we missed the independent social interaction with colleagues that we’d always enjoyed in our working life. Now that we have joined the u3a we can both still do that by pursuing our separate interests, and still have stimulating conversations about our separate activities with each other”.

“When my wife passed away, I had to embark on a whole new way of life and joining the u3a has given me a sense of purpose. As an ex-teacher I especially like being able to share knowledge on my favourite subjects.”

“I live alone now because my family are on the other side of the world. I cannot say I am an expert at anything, but I do enjoy hearing talks about subjects that I would never otherwise have thought about. Also, the monthly members meetings give me a sense of purpose where I can enjoy the company of others”.