As an example of our meetings here is a note on the meeting in October 2021.

This month our group was delighted to be entertained by Martin Hazell and Jon Stevens whose presentation of the life and music of Cyril Tawney included a retrospective on Tawney’s life with the addition of some live and recorded music.

Cyril Tawney was born in Gosport in 1930 into a family with a tradition of maritime service so it was inevitable that he joined the Royal Navy at the age of 16 and went on to serve for 13 years, much of that time on submarines. 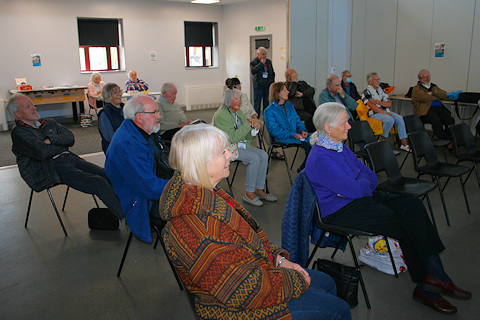 Maritime History Group join in with the singing.

During his time at sea he developed what became a lifelong interest in English traditional music that resulted in his leaving the Navy in 1959 to become a full time musician. It was also in that year that he wrote a song entitled ‘The Oggy Man’ that became his sobriquet and stuck with him until his death in 2005. Cyril was well known in Plymouth and for several years in the 1960’s had run a folk club which a few of us at the meeting had previously enjoyed attending.

On the weekend following our meeting, Martin and Jon took part in a 2-day event celebrating the life of Cyril Tawney, which was originally planned for last year, but was now finally able to take place. Martin and Jon can be seen on occasions performing down on the Barbican at special events.

The group enjoyed this presentation, joining in with the chorus on some of the songs and talking to Martin and Jon afterwards about their performance.

The Maritime and Military History Groups are run in conjunction with each other and cover a wide variety of subjects both military and non-military. We are always happy to welcome new members.